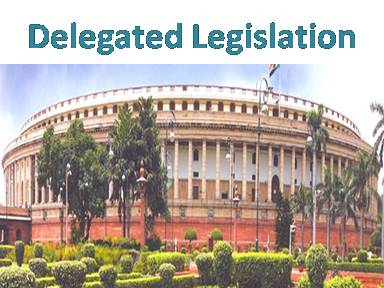 Delegated legislation is one of the issues in the field of administrative law, and has a close relationship with the parliamentary government and the executive power in general. Lord Heward identified the emergence of delegated legislation and administrative courts as the manifestation of “despotism,” the title of the book that appeared in 1929. C. K. Allen described this new power of the Executive as “Triumphant of the bureaucracy.” Delegated legislation has become indispensable in modern welfare states that have assumed multiple functions to improve the fate of the common masses.

The Donoughmore Committee thus defined Delegated Legislation: “The word legislation has two grammatical meanings: the operation or function of the legislation; and the laws that result from there. Also, delegated legislation may mean the exercise by a subordinate authority, such as a minister, of the legislative power delegated to it by Parliament, or the subsidiary laws approved by the ministers in the form of departmental regulations and other legal norms and orders. “

The approval of the law is the responsibility of the legislature and not of the Executive. Since the rules established by the Executive have the force of law and are enforceable by the courts of justice, this power to make rules is combined as Delegated Legislation, Executive Legislation or Subordinate Legislation. It is clear that delegated legislation means the exercise by a subordinate authority, such as a minister of legislative power delegated by Parliament. Parliament approves the bill in general terms and delegates the regulatory authority under the Law to the corresponding Minister. If the rule is not consistent with the statute, it is null and void. The term delegated legislation is used in two ways: (a) It refers to the powers delegated to the executive to establish rules. (b) It means the exit of the exercise of that power, namely rules, regulations, orders, etc.