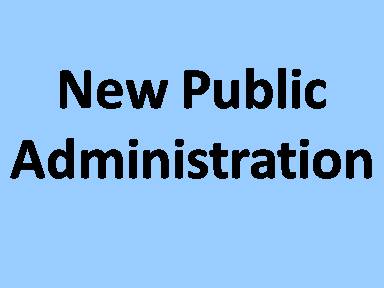 The New Public Administration has its origins in the first Minnowbrook Conference held in 1968 under the patronage of Dwight Waldo. This conference brought together the best academics in administration and public administration to discuss and reflect on the state of the field and its future. The 1960s in the United States was a time of unusual social and political turbulence and turmoil. In this context, Waldo concluded that neither the study nor the practice of public administration responded adequately to the increasing turmoil and complications that arose from these conditions. Part of the reasoning for this, Waldo argued, was the general distrust that had been associated with the public administration itself. It was necessary to make a call to renew the ethical obligations of the service sector to rebuild public confidence in government and the bureaucracy in which corruption and the personal interests of others had been plagued. Moving towards a more ethical public service, then, required attention to the underlying values ​​that support the public service and public servants in any sector.

The new public management (npm) did not offer public servants an alternative model to help them resolve conflicts and emerging tensions. The concepts of citizenship, democracy or public interest have evolved over time and continue to evolve. Consequently, the role of government and the role of public service are being transformed in ways that go beyond the limitations of the classic model that he considers that from different perspectives can challenge, clarify and create a story that has enough depth to serve not only a story in a traditional sense but also an interactive timeline that ignites constant improvement. In essence, public service requires a vision that extends beyond narrow self-interest. Waldo believes that public administration and bureaucracy are integrally linked to civilization and our culture in two ways: the evolution of civilization itself depended on public administration and related concepts are constitutive elements within a civilization and specific culture.

The new theory of Public Administration deals with the following problems:

Democratic citizenship; It refers directly to the belief of creating a government where the “common man” has a voice in politics. For this work approach to work, citizens must be aware, knowledgeable and active in their communities and nations. True democratic citizenship requires more than voting for representatives. It requires using one’s own mind, voice and actions.

Public interest; It refers to the collective common good within society, whose main objective is the public interest.

Public politics; The means by which a new public policy is promulgated and introduced. It is not limited in public participation, but participation is encouraged.

Citizen services; Provide and maintain the moral and ethical standard in terms of satisfying the needs of citizens through institutions and bureaucracies.

First, a “new” theory should begin with the ideal of democratic citizenship. The public service derives its true meaning from its mandate to serve citizens to promote the public good. This is the reason of being of the institution, the source of motivation and pride of all those who choose to make their lives, whether for a season or for a full career.

Customer centricity: this means that the effectiveness of the administrator must be judged not only from the point of view of the government, but from that of the citizens. If administrative actions did not improve the quality of life of citizens, then they are not effective despite the rationality and efficiency they may have.

Political-Administration Dichotomy: given that today’s administrators are involved in policy formulation and policy implementation at all stages. Dichotomy that means “a division or contrast between two things that are or are represented as opposite or completely different.”

Case studies: case studies help public administrators to highlight situations and events in which policies were not carried out as they should. They set an example of what to do and what not to do. Case studies are a basic way of breaking down events to learn from other people’s mistakes and the effects that those mistakes have had on the community. With the public administration being a work dedicated to the people; It is an obvious way to see the reality of the work you do in the community. While there are many cases in which the policies were not carried out as planned. There are also many examples of policies implemented that have benefited the communities, and it is also important to observe them.

Change of structure: the public administration is moving in many different directions, now it is more frequently called public management. This is because the work is moving in a direction not only of implementing policies for people but also of managing policies as it moves through the legal process, so that it is realistic for the communities and the people who integrate them. .

Jack of All Trades: the best public administrators tend to be someone who has knowledge in politics and law, but also participates in community functions. This allows a smooth transition from policy to implementation.

Criticism of the new public administration

Although the New Public Administration brought public administration closer to political science, it was criticized as anti-theoretical and anti-management. Robert T. Golembiewski describes it as radicalism in words and status quo in skills and technologies. In addition, it should be counted only as a cruel reminder of the gap in the field between aspiration and performance. Golembiewski considers it as a temporary and transitional phenomenon. [5] In other words, we can say that solutions to achieve goals and antimetas were not explicitly provided by NPA academics. Second, how much should be decentralized or delegated or de-bureaucratized or democratized to achieve the objectives? On this front, NPA is totally silent.

As stated in A new synthesis of public administration, governments have always been called to make difficult decisions, undertake complicated initiatives and face complex problems characteristic of the period. This is not under discussion. However, current circumstances are determining what can be handled in the traditional way and what should be done differently.

Governments have always been called upon to face difficult problems. Setting priorities and making decisions has always been difficult. For example, eliminating a considerable deficit is “simply” a difficult problem, although it is hard to believe when one is in the middle of such a heartbreaking exercise. This implies making decisions between equally deserving public purposes and making difficult decisions about what should be preserved for the future. It requires reconciling future needs with what could obtain a sufficient degree of short-term public support to move forward. The academic public administration has lagged considerably with respect to the practice of public administration. Improved curricula and a new focus on the dynamics of government administration policies will be important factors in attracting more students to study public administration. It is more important to increase the number and improve the geographic diffusion of universities with public affairs programs, integrating the components of public affairs in the curricula of other postgraduate and professional programs, developing many more educational programs in service and half of career for public servants, and using existing resources to strengthen public affairs programs.

Criticism being ineffective in democracy

India should increase its activity in Afghanistan