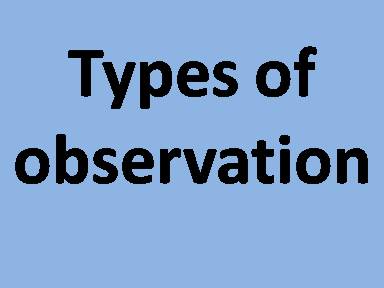 The observation can be of the following types

i) Naturalistic versus controlled observation

When observations are made in natural or real-life environments, it was a school where observation was made, it is called naturalistic observation. In this case, the observer makes no effort to control or manipulate the situation to make an observation. This type of observation is performed in hospitals, homes, schools, nurseries, etc. However, many times you may need to control certain factors that determine behaviors that are not the focus of your study. For this reason, many of the studies in psychology are performed in the laboratory.

ii) Observation of non-participant vs participant

The observation can be done in two ways. One can decide to observe the person or event from a distance. Two, the observer can be part of the group being observed. In the first case, the observed person may not be aware that he / she is being observed, for example.

You want to observe the pattern of interactions between teachers and students in a particular class. There are many ways to achieve this goal. You can install a video camera to record classroom activities, which you can see later and analyze. Alternatively, you can decide to sit in a corner of the class without interfering or participating in your daily activities. This type of observation is called non-participant observation.

Method of studying student behavior in the adolescent stage

The danger in this type of configuration is that the very fact that someone (a stranger) is sitting and observing can bring a change in the behavior of the student and the teacher.

Madagascar forests may end due to climate change

The advantage of the observation method is that it allows the researcher to study people and their behavior in a naturalistic situation as it occurs. However, the observation method is laborious, time-consuming and susceptible to observer bias. Our observation is influenced by our values ​​and beliefs about the person or the event. You are familiar with the popular saying “we are things as we are and not as things are”. Due to our prejudices, we can interpret things in a different way than the participants can mean. Therefore, the observer must record the behavior as it happens and must not interpret the behavior at the time of the observation itself.

14 thoughts on “Types of observation”